This website uses cookies to offer you a better browsing experience.
You can learn more by clicking here.

Selling is getting your price on your terms and conditions.

Negotiating is modifying your price or terms in some way to get the agreement.

Remember: It’s not where you fell, but where you slipped that counts.

Many negotiating problems are really weaknesses in the sales process that become evident when you go to final negotiation. The key is to make sure you don’t just treat the symptoms, but that you go to the source. Great negotiators focus first on being great sellers. Effective use of the Sandler Selling System® methodology will help you enter negotiations in a stronger position.

You state your price and the buyer almost falls out of his chair, regardless of the price. You can disarm the flinch with a preemptive move early in the sales cycle.

A good understanding of your prospect’s needs means:

Now that you have the buyer focused on the issue and its impact on him, ask:

“If I were to tell you that a solution would require an investment of $X, would it make sense for us to continue our discussion?”

If he answers yes, you have eliminated or reduced the potential impact of the flinch as you go to close the sale. If he answers no, it is a red flag that this prospect is no prospect at all.

Gambit #2: Your Competition is Cheaper!

“We really want your solution, but Y Corp is coming in 25% cheaper.” The competitive threat makes you feel like you are losing the deal. The threat of losing increases its importance to you. Competition, real or imagined, creates a buyer’s market.

The following is a written transcript of an actual buyer-seller phone conversation. It’s slightly edited to remove names.

Salesperson: “Of course I’m disappointed, but I really appreciate your courtesy in calling to let us know you’re going with them.”

Salesperson: “I’m surprised. If it does the same things we can do for 1/3 our price, seems like you’d go with them.”

Buyer: “Well, they don’t do exactly the same thing.” (How would you respond?)

Salesperson: “But for your purposes, is it fair to assume they do what you need?”

Buyer: “Actually, I think they do. But it’s a one-man shop, and I’m not sure how long they will be around.” (What would you say?)

Salesperson: “You know I want to work with you, but you should do what’s in your best interest.”

Buyer: “Well, you guys won that award. If I go with them it means more risk if it doesn’t work out.”

You get to the end of the sales cycle. You have a done deal. Now your prospect drops the Higher Authority move. His boss has to approve it—despite the fact that he insisted earlier that he was the decision maker.

This is a variation of Higher Authority/Lower Authority, where there is someone else, with whom you are not negotiating, who is portrayed as the real bad guy—someone who is hard to do business with. Sometimes this can happen in a team, where you are negotiating with a few people and one of them takes a bad guy approach and another takes a good guy approach. Usually, your contact person maintains the good guy persona. The bad guy may be a higher level person and is often the CFO. (“I can buy this, but John in IT has to use it and he doesn’t like you guys!”).

It’s just like the children’s game: the buyer takes a problem which is really his own and tries to toss it to you. For example, have you been in a situation where you worked through a process and evaluation, had agreed on the investment early on, went through and demonstrated that you had a solution which would solve the prospect’s problem, and as you got down to getting the deal done he said, “I’ve got some bad news. We just had our budget cut by 30% on this project”?

The emotional outburst is a strong flinch, often used late in the sales cycle. “Your support is terrible and you have a negative reputation with the people I’m talking to.” The buyer expects you to panic and uses that to leverage his position.

You have a deal structured and agreed to, and then at the last moment the buyer makes a change to the price or terms and modifies the final document—then sends it to you as a done deal. It can also be verbal. The buyer says, “Great, let’s do this!” Then he leans across the desk and says, “This includes the training, right?”

The buyer tells you that you’ve made the short list and the next step is to get Best and Final Offers (BAFO). He may even use a Best and Really Final Offer (BARFO) after the BAFO. It’s designed to make you feel as if you’re close, but you’re at risk of losing the deal because your price is out of line.

When you get this move, it might be because your prospect has decided on you and is just trying to squeeze a little more money out of you. He might also be doing this to try and use your price to beat up on his preferred vendor, which is another company.

The buyer stops communicating. This may be timed to match your quarter end. It’s like a basketball team that’s up by a few points running down the clock. In an attempt to get your prospect back, you sweeten the pot by offering him things to lure him back, so he gets both some free gifts and the upper hand.

The buyer says, “We are going to do a lot of business with you. This first project is just a small pilot and if it goes well, there’s a ton more to come.”

Nibbling is continuous chipping at your proposal over time, taking a little concession each time. It’s also referred to as “incremental negotiating.” The buyer may ask you for some concessions very early.

If he asks for concessions early, you may tend to think it’s a good idea to give concessions to build the relationship. You may, alternatively, see it as a buying sign and a chance to close. “Let’s sweeten the pot so much they can’t resist!” What’s the problem? Like chess or checkers, your earliest moves have the greatest impact on the outcome. You set the context in the early interaction.

The professional negotiator may not do all of his negotiating in one sitting. He will come back for more later. If you give it all away up front and he comes back a second time, you have no room left to maneuver. Offers made closer to the deadline are considered more real and are taken more seriously.

This usually happens with large, complex deals that are negotiated over a long period of time. In this circumstance, you generally have teams of people on both sides working on the deal for several weeks or months. You have given varying levels of concessions from your company in return for varying levels of concessions from the buyer. Finally, after a long period of time, a deal is put together that you think is in everyone’s favor and is a win for both companies.

Then, you receive a call from your prospect telling you that he has been pulled off this project and assigned something else. He tells you that his replacement will be in touch with you regarding next steps. What does the new contact want to do? Generally, he looks at the deal you negotiated with the previous person and tells you there is no way you’re getting that deal done. It isn’t a good deal for the company. The new contact person wants to start negotiating the deal from where you had previously reached an agreement.

Buyers all have their moves to help tip the leverage scale in their favor. We have all seen it in the sales process. The buyer says, “We can get this anywhere,” or “We need a discount to stay with your company.” There are countless other moves buyers use. A professional salesperson will know the common gambits used and will have responses to those gambits already committed to memory.

The same holds true for a professional negotiator; you know the gambits used by the buyer and have your countermeasures already created and committed to memory. This allows you to stay as a third-party presence during the event and to co-create a successful outcome.

You learned the top 12 gambits used by professional negotiators, why they work, and how to prevent them. Now, you need to practice each countering technique so when you hear a gambit, you are ready to respond. 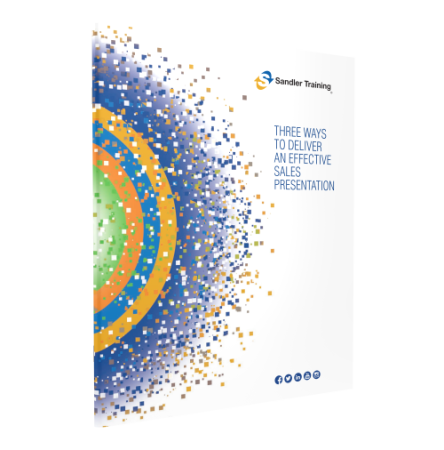 Win over your prospects
Deliver the winning sales presentation

Deliver the winning sales presentation and say goodbye to the traditional approach. Discover three important steps that will create a strong, productive impact with prospects during your presentation.

Get the report here